IIn 2005, Diane Palley created two silk-screened/etched panels for the new Goodson Chapel at the Duke Divinity School in Durham, North Carolina. She was a Finalist in the 2000 Philip & Sylvia Spertus Judaica Prize Competition for her Torah cover, and was awarded the American Institute of Architects Excellence in Religious Art Award in 1994 and the Massachusetts Fellowship in Folkart in 1989.

She accepts commissions for papercuts, prints, fabric art, ceramic projects and architectural design from individuals and institutions, and offers silkscreen, lithograph and lasercut reproductions of her papercuts. Diane's work can be seen at Kolbo in Brookline, Massachusetts. 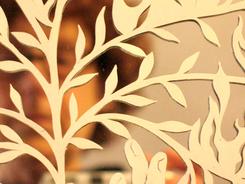 Diane began her career in papercutting by learning how to cut stencils for the silkscreen process. In the 1970's in New Mexico, she created dozens of silkscreen posters for various peace and justice causes. She also created her first piece of Jewish art as a linoleum cut illustration of a Passover  folk song"Had Gadya".

Diane Palley was born in Atlantic City, New Jersey in 1949 and has been an artist throughout her life, experimenting with various media including printmaking, illustration, papercutting, ceramics, and fabrics. While living in Boston, she learned papercutting from two of the masters of this traditional folkart, Joahnn and Martin Farren. Using this intricate technique, Diane has created hundreds of original papercut images; illustrated books, posters and CD covers; and arks, doors, windows, panels, and banners for architectural projects, She has lived in her beloved adopted home, New Mexico, for much of her life, and has created ceramic tiles, mezuzot, amulets, ceremonial objects and murals combining Jewish images with southwestern and Chinese ceramic techniques.  She translates her papercut images to etched and silkscreened glass for architectural installations institutions around the country.